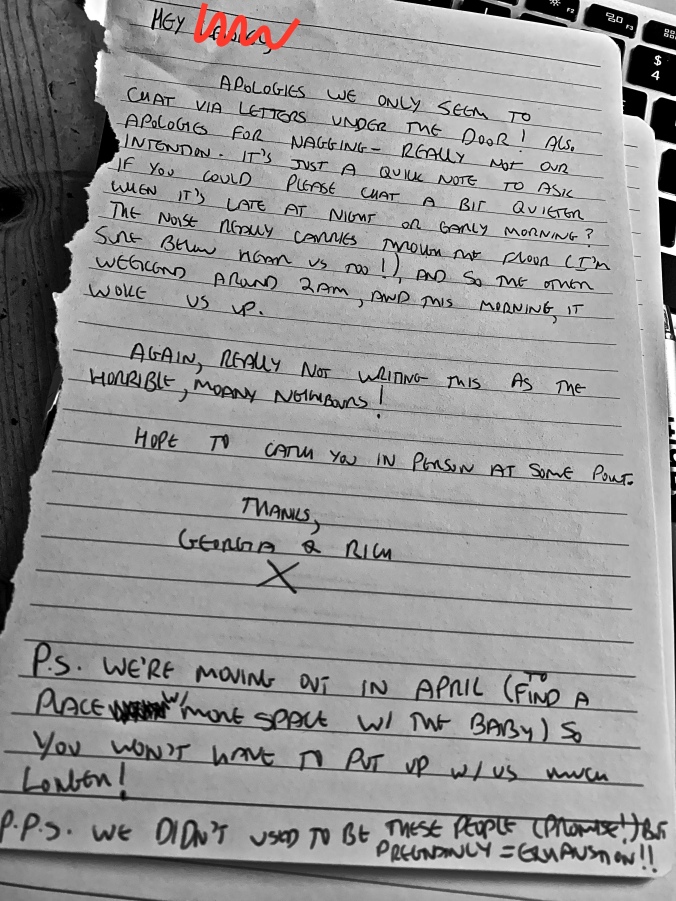 So it’s finally happened. I’ve become that person. You know, the one who sends passive aggressive notes to the neighbours complaining about their noise? I’d like to apologise up front. Firstly, to myself for becoming such a bore (literally over night), secondly to our  overhead dweller (I think I did a good job…?), and lastly to everyone empathising with the unnamed tyrant, who is merely trying to live a sociable life at anti-social hours, in a block of poorly converted period flats.

If I was less hormonal, and therefore simultaneously less irrational and more tolerant, I would do the usual polite British thing, of silently harbouring resentment. Meanwhile building up to the day when I can take no more, and in a public showdown worthy only of Jeremy Kyle (think Jerry Springer), I declare pistols at dawn (cue the hair-pulling and egg-throwing) against nuisance neighbour. Or more likely, I plaster both our faces across my slanderous narration of ‘My Neighbour From Hell’ in the Daily Mail. Alas, my (in)sanity has (no) limits.

The thing is, it was 7am, and my husband (after much coaxing from me since a) his alarm was set long before mine, and b) he’s generally the sweeter of us two these days) had already tried the whole banging-on-the-ceiling-with-the-vacuum-wand trick. However, the cackling continued to rain down on us, and my tears threatened to rain down on him. Therefore, I was left with no choice. The shirty but nice note, penned itself.

Perhaps it’s the norm outside of London, or any big city for that matter, to communicate vis-à-vis with your neighbours, but here that would be sacrilege/nigh on impossible. Especially given we take it in turns to wait until the other one’s door has closed, before we creep along the corridor, and race out the communal entrance. I know she does it too. I’ve heard her breathing from behind the safety of her wooden portal!

In case you’re wondering, this isn’t our first threshold transmission. The first was when my husband, patiently following my (in)sane logic, requested that she remove the plugin air freshener from the corridor. Obviously, the dreadful device a) made me nauseous, and b) could make our baby sick with the deadly chemicals it was pumping out. She conceded. We also received a lovely letter back. I say lovely, because realising she was dealing with a pregnant head case, she had the good humour to make a ‘hope we bump into each other’ joke. Of course we never did ‘bump’ into each other, and given our hiding-behind-the-door act, I’m sure we never will.

Nonetheless, please don’t judge me. I had held off from taking a stand until her second selfish wakeup call. The first was two Saturdays ago, when at 2.16 am (yes I know my letter notes her crime almost casually, to the hour, but I could hardly confirm her suspicions I’m crazy could I?!), I thought it strange that I be awake and not needing to pee. That was until I heard our neighbour, and her awful accomplice, come crashing up the stairs, and against our door, where they would commence their hour-long mothers’ meeting.

Despite everything I’ve said, I do understand where my neighbour is noisily coming from. I’ve been there too, and I remember it all too well. Back when my husband and I were two youthful, and cool 22-year-olds. Scrap that. Back when we were two youthful (we were never cool) 22-year-olds, living in Parsons Green, we were the monsters/ life and souls of the party wreaking havoc. You’d find us hysterically laughing first thing in the morning, and then crashing through the communal door at 4am. Strangely, our neighbours-with-small-child didn’t see the funny side of our inconsideration either. On occasion, and undermining my previous argument that Londoners avoid face-to-face confrontation, the husband would appear sheepishly on the other side of a plea to ‘please keep it down’. Oh how we bemoaned our boring neighbours. Oh how they must have hated us.

I wonder what the turning point was for me. Perhaps London, or rather Londoners with their reckless abandon for other people’s welfare have defeated me, and my hormonal humanitarianism? After all, I’m at breaking point with people’s disregard for anyone outside of their virtue signalling vacuum. Or maybe the selfish veil of youth has finally lifted? Maybe the last 22+ weeks of disturbed nights (thanks pregnancy bladder) have finally caught up on me? Or perhaps I’m clinging tightly to my 11 short weeks of remaining sleep (for the next 18 years)? I’ll never know. However, what I do know, is I’m sorry to everyone I have ever woken up in a communal living space. Especially to my parents.

I'm 29 years old, married to Richard, and mum to a beautiful boy! I am obsessed with decluttering, and love the countryside, my family, and mascara!